Blockchain holds huge potential in many areas - also in logistics

Blockchain technology is making headlines in the logistics industry: 90 percent of blockchain-based projects used within supply chains cause problems, according to a study by the US market research company Gartner. Nevertheless, industry experts say that blockchain is a technology that can hardly be avoided, especially in logistics.

How can Blockchain be assessed? Journalist Ina Kaifi interviewed three specialists for SEVEN SENDERS on how Blockchain actually works and how they assess the technology.

Once upon a time…

The year is 2008. The world is in a financial meltdown: banks crash, people lose their homes, panic reigns on Wall Street. In this peak phase of the low point, a paper called Satoshi Nakamoto suddenly circulates, which is about a new currency – rather about a new system: a digital cryptocurrency, called Bitcoin. Banks are superfluous here. No middlemen, no Lehmann Brothers. How is that supposed to work? The answer is blockchain.

Blockchain not equal to Bitcoin

Since then, the term has wandered through all networks. But only a few seem to know what it is all about. One of them is Prof. Wolfgang Prinz, Deputy Director of Germany’s Think Tank, the Fraunhofer Institute.

An entire team is working intensively with Blockchain. Prof. Prinz knows that he has to start at the very beginning when explaining blockchain. “The first thing is to understand that Bitcoin is just one application of a technology, the blockchain,” he explains. “But the technology can do much, much more than just generate a digital currency. Blockchain is a database. In contrast to conventional databases, however, it is firstly decentralized and secondly counterfeit-proof.

“Imagine a Kontor  –  an antique branch office,” says Professor Prinz. “The drawer cabinets of this office are filled to the brim with paper. A Kontor is basically an analog database. In the course of digitization, all these documents were translated into data.”

Since then, data has exploded in numbers and is stored on gigantic servers. They have become a precious commodity. But one thing has not changed: It is still a central principle: just as the office clerk was the master of the data, central databases also have an owner. This can be a bank, but it can also be a company or a private individual. The data converges somewhere. Blockchain works differently.

From central to decentral

“We don’t have one office clerk here, but many,” explains Prof. Prinz. “All are participants or members of the network. And each of them displays the data on his computer,” says Prof. Prinz.

That is probably the most important difference to conventional systems. Skepticism immediately sets in at this point. A kind of open system, all are the bosses – who is in control? The blockchain itself! The magic word is cryptology – encryption.

Blockchain: How the data blocks work 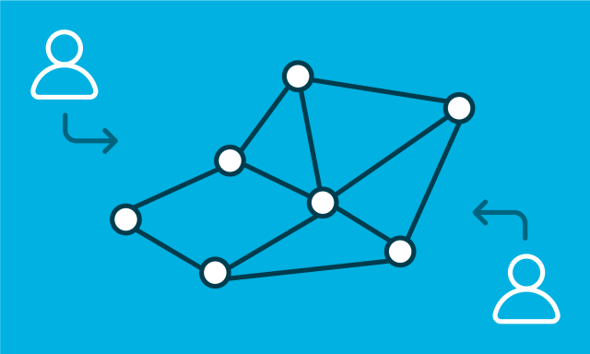 In contrast to central databases, blockchain is decentralized and is displayed on other computers.

After an automatic check, changes are saved in intervals – on all computers simultaneously. (Source: Fraunhofer Institute FIT)

In the blockchain, data for all information and transactions are arranged in a continuous chain of blocks. Each change in the database is stored one by one. “Therefore, changes are traceable, i.e. the entire history is preserved. In retrospect, the blocks cannot be changed because they are cryptologically linked to each other,” explains Prof. Prinz.

Each participant of the blockchain permanently synchronizes his data chain – this also means: “If someone tries to manipulate data in the blockchain, this is immediately revealed – to everyone. This makes manipulation virtually impossible.”

And here we are on the subject of data security. Transparency instead of trust –  that’s how we get to the heart of the matter. The English magazine “The Economist” described blockchain as the “Trust Machine”. In other words, a trust machine that offers for Prof. Prinz numerous opportunities in many areas of life, business and education. Especially in logistics.

A good couple: Blockchain and logistics

After all, what does it mean when a technology maps processes  –  even in real time  –  that can be seamlessly traced and trusted?

A great blockchain advocate is Dr. Ulrich Franke. He learned logistics from scratch and has worked in management positions in international logistics companies. He now advises companies on the subject of blockchain.

Dr. Franke sees huge potential with regard to the entire supply chain – from documentation, track & trace, production and distribution to asset transfer, i.e. the transaction of all property rights. “Blockchain offers numerous perspectives, especially with regard to complex logistical processes in which many partners are involved,” says Dr. Franke.

So far each company has its own complicated  –  and closed –  network. Setting up interfaces, for example to logistics partners or customers, often poses major challenges. Blockchains, however, can connect all participants in a very uncomplicated way, since the network is open to everyone.

This does not mean, however, that everything can be seen by everyone. “The partners determine in detail which data can be used by whom,” says Dr. Franke. The high security of the blockchain prevents what many fear: Trojans. “Once the firewall has penetrated the central databases, the motto is: Whoever is inside, is inside. With the blockchain, this danger virtually does not exist,” says Dr. Franke. 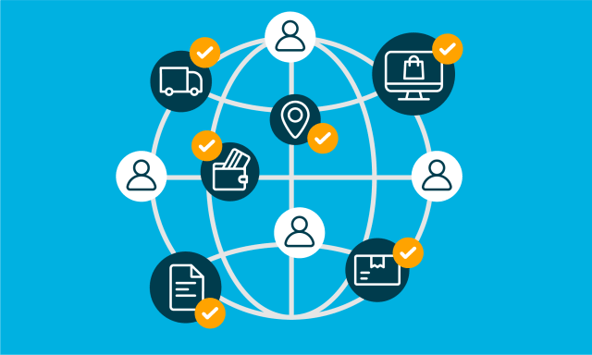 All participants of the blockchain can access identical information. Order documents are digitally signed and stored decentrally. Secure authentication of assets – such as containers, wagons, parcels – is possible worldwide. The blockchain is considered forgery-proof.

The If-Then Principle or: Smart Contracts

The fact that blockchains offer a high degree of security is made possible by the so-called “Smart Contracts”, a term that appears again and again in connection with blockchains and logistics.

Smart Contracts –  not to be confused with business contracts – operate according to the if-then-principle.

An example: A retailer wants to transport a good from A to B: He writes an offer in the blockchain. This can be viewed by connected delivery services. The service provider with the best offer is automatically awarded the contract. As soon as the product arrives –  as evidenced by the recipient’s signature, for example –  the Smart Contract recognizes that everything has been fulfilled. Now the payment is triggered automatically.

Blockchains are therefore in principle particularly clever, autonomous and particularly efficient systems for storing and transferring data. Which can create other systems. And according to Franke, this is where things will get particularly exciting.

With Blockchain to your favourite coffee

The combinability of blockchain with other technologies, such as artificial intelligence (AI) and the Internet of Things (IoT), creates completely new business models, which in his opinion have the power to revolutionize industry 4.0.

An example: a delivery to Moscow is connected to the blockchain via a transmitter. It creates its routing using AI. Then it sends a request to taxis. The autonomous taxi arrives at the airport, picks up the parcel and takes it to the recipient. Here you can spin the thread endlessly: Perhaps the parcel learns from Big Data that it is snowing in Moscow and prefers to take the drone…

The blockchain is not just another technology, but a combination of technologies. All in all, from Dr. Franke’s point of view, it’s “astounding”.

A sign of things to come? According to Franke, it is  already a visible one. The weak points of Blockchain  –  high energy consumption and slowness  –  are also slowly getting under control. Blockchain is already in phase 2.0.

However, Dr. Franke has one concern: The Blockchain is not really getting going in Germany: “We are relatively good in research and development, but we are extremely bad in application and implementation,” he says. “In the USA, China and India, the topic is booming and the good programmers from Silicon Valley have long since been poached by blockchain companies. His mission: Enlightenment.

“We’re at the very beginning.”

David Holtkemper learns from his daily work that blockchain is still in its infancy. He heads the Supply Chain Management section at the FIR Institute, which is affiliated with RWTH Aachen University. Holtkemper and his team work closely with companies. The aim is “to close the gap between research and industry”.

He is also enthusiastic about the cryptographic blocks  –  albeit with a certain reluctance. He sees weaknesses, for example in writing data into the system. Can the American retail group Wal-Mart, which has discovered Blockchain for itself, really use this technology to trace the origin of every mango, as it claims? “This is only possible if the mango picker really and truthfully feeds the loading of the fruit into his app at the place of origin,” says Holtkemper.

“We are at the very beginning,” says Holtkemper, for whom Blockchain is initially a broad field of experimentation. Start small, so his motto. In cooperation with e.Go Mobile, the producer of electric compact cars, FIR has developed a blockchain logbook that works well. “First of all, it’s about companies opening up and finding out whether blockchain makes sense for them at all.” If this is the case, the system is quickly installed, in one case it was done in three days. “The challenge is not the technology, but the project management,” says Holtkemper. How do you manage several partner companies with equal rights?

Decentralized networks also mean that no one is wearing the hat. And at this point, many people in charge are sceptical: What really happens with the data collected so carefully? IBM is already delivering solutions for the company’s own blockchain. But that contradicts the idea of an open network.

Blockchain is a technology that works decentralized and secure without intermediaries, brokers or other so-called intermediaries.

Once again back to Satoshi Nakamoto, who has not yet come out. He wanted to replace the banks as central authorities with a transparent, trustworthy currency. Blockchain’s idea of abolishing the one Kontorist has something very basic and democratic about it. Can competition and blockchains be married at all?

And according to a study by the US market research company Gartner, problems that arise in blockchain-based projects within supply chains are a sign that blockchain is not the technology of the future? According to Gartner, 90 percent of companies face major challenges, for example in the development of products suitable for series production. The complexity of blockchain is also difficult to communicate to customers. However, the results could also indicate that these are the usual starting difficulties for innovations.

One thing is certain: Blockchain brings with it many questions. Holtkemper sees it this way: “As with any new technology, it’s not just about understanding new things. It’s also about rethinking.”

Five steps to the blockchain

Would you like to know whether Blockchain is suitable for your business model? This Steps suggests David Holtkemper, director of the FIR at the RWTH Aachen, to companies: 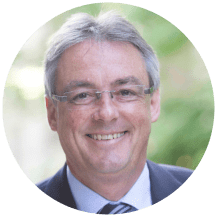 Dr. Ulrich Franke, Head of Institute for Supply Chain Security GmbH, worked in leading positions at industrial and logistics companies in Germany and abroad, was professor for logistics and supply chain management at the private SRH Hochschule für Logistik und Wirtschaft in Hamm and since 2013 heads the Institute for Supply Chains Security GmbH (http://supply-chain-security.org), which among other things offers consulting on the subject of block chains.
Contact: ulrich.franke@supply-chain-security.org